Susan Pitard Acree is Music Director of Daytona Solisti, which she founded in 2005. It is comprised of professional musicians from Central and North Florida. The size of the group varies according to the requirements of the concert repertoire being performed. She is often violin soloist and chamber music musician with the group.

As a violinist in the Atlanta Symphony Orchestra from 1968 to 1990 Ms Acree performed with world class soloists not only in Atlanta but in other important music centers in this country and abroad including New York City (Carnegie Hall), Chicago, Los Angeles, New Orleans, Mexico City, London, Paris, East Berlin, Stuttgart and more. Ms. Acree was viola d’amore soloist in 1970 with the Atlanta Symphony, conducted by Robert Shaw, in three performances of St. John Passion by J. S. Bach. In Atlanta she maintained a studio of private students of violin and viola and taught at Georgia Perimeter College from 1994 to 2005. From 1994 to 2005 she also served as concertmaster of the Atlanta Community Symphony Orchestra, performing solo with the orchestra concertos by Mendelssohn, Bruch, Mozart and others.

In 1991, after leaving the Atlanta Symphony, Ms. Acree and her beloved black standard poodle Cinder-Babe set out on a wonderful two year RV road trip. This was partly inspired by John Steinbeck’s novel Travels with Charlie, one of her favorites. Ms. Acree made and sold her handcrafted jewelry along the way.

In 1997 Ms. Acree and her husband Darrell Acree opened a vioin shop, Acree Violins, Inc., in Lilburn GA, a suburb of Atlanta, and maintained it until moving to Daytona Beach in 2005. Ms. Acree was Founding Director of DaSalo Solisti Chamber Orchestra in Atlanta from 2001 to 2005. DaSalo Solisti Chamber Orchestra performed concerts in churches in the Atlanta area. Ms. Acree also performed with the Georgia Sinfonia and St. Cecilia chamber orchestras and was an active freelance violinist.

Beginning in 2005, she taught violin and viola for two years at Stetson University Community School of the Arts in DeLand and she performed violin in Sunday services at Grace Episcopal Church in Port Orange until 2007. Ms. Acree was also director for ten years of the Music for Prayer and Meditation ministry at All Saints Lutheran Church, sponsored by Port Orange Ministerial Association.

In 2007 she joined the music staff at First Presbyterian Church of Daytona Beach as Choir Director and Artist in Residence, soon becoming Director of Music and Artist in Residence. In October 2020 she stepped down from her position at the church and moved Daytona Solisti’s 2021-2022 concert season to Lighthouse Christ Presbyterian Church in Ormond Beach.

Pianist Dr. Michael Rickman and Ms. Acree have collaborated in the performance of many concerts sponsored by Daytona Solisti since 2007. He has performed piano concertos yearly with the orchestra with Ms. Acree conducting, including performances of the five piano concertos by Beethoven. They have also performed sonatas for piano and violin by Mozart, Schubert and Beethoven and piano trios with Daytona Solisti’s principal cellist Joseph Corporon in the Rickman-Acree-Corporon Piano Trio. In 2018 Dr. Rickman was designated Artist in Residence of Daytona Solisti. In 2015 Dr. Rickman became organist and pianist at First Presbyterian Church and he and Ms. Acree performed the Sunday service music until they both stepped down from their positions at the church in late 2020.

Ms. Acree holds a degree in violin performance from Indiana University School of Music. Her violin teachers included Josef Gingold and Mischa Mischakoff, and in chamber music, Janos Starker at Indiana University and the Hungarian String Quartet at the Colby College Summer Institute in Maine. Steinway Artist Michael Rickman has been portrayed as “a resourceful and sensitive pianist, technically in control and emotionally rewarding.” New York Times critic, Bernard Holland, hailed him as “a sure and steady pianist.” Drew Murphy of the Daytona Beach News Journal wrote, “Michael Rickman communicated a sense of musicality, masterful technique, and unswerving control that stayed with him for the entire program…a happy combination of the head, hand and heart, he is an intelligent, even intellectual performer…” Having achieved critical acclaim on three continents, he was described by a South American critic as “a discriminating pianist, whose masterful touch equaled the challenges of each passage” (El Mercurio-Santiago). European critics valued his “technical precision and great tonal beauty, a performer with stylistic and nuance-rich acumen” (Saarbrücker Zeitung). “Michael Rickman, brilliant at the keyboard, played not as a technician, but as a musician, who lived the performance with both body and soul” (Badische Zeitung-Freiburg). His performances have taken him to many significant cultural centers around the world – Wagnersaal in Riga, Latvia; Alice Tully, Bruno Walter and Carnegie Halls in New York; Frutillar International Music Festival, Chile; as well as performances in Miami, Palm Beach, Philadelphia, Louisville, Kansas City, Sacramento, Toronto, London, Paris, and Frankfurt.

Additional international exposure includes appointment as visiting Professor at Stetson University’s sister institution, the Paedogogische Hochschule in Freiburg, Germany, in 1997. From 1999 through 2006, Dr. Rickman taught in the Stetson University summer program at the University of Innsbruck, Austria. In summer 2007, he joined the faculty of the prestigious Orfeo International Music Festival (formerly Schlern International Music Festival), Vipiteno, Italy. This summer 2018 he will return to Orfeo for the 12th season as an artist in residence. In October of 2007, he was invited to appear in a series of performances and master classes in Bolivia, assisting in the Centennial Celebration of the Bolivian National Conservatory in La Paz. In November 2014 Dr. Rickman performed in Chile as well as served on the international jury representing the United States for the XLI International Musical Competition “Dr. Luis Sigel” (Mencion Piano) in Vina del Mar, Chile.

In 1990, Dr. Rickman was the first recipient of Stetson University’s Homer and Dolly Hand Award for Creative Activity and Research, the Award again received in 2013. In 1995, he received the highest honor given by Stetson University, the William Hugh McEniry Award for Excellence in Teaching. He received additional grants from Stetson University allowing him to study the late works of Beethoven and Schubert with the pianist Edward Kilenyi, the works of Twentieth Century Dutch composers with Dutch pianist-composer Piet Stalmeier, and a third grant enabling his continued research in the area of Robert Schumann and E.T.A. Hoffmann. Dr. Rickman has also served on the faculties of William Woods and Westminster Colleges in Fulton, Missouri, and at Southeastern Louisiana University in Hammond.

A native of Asheville, North Carolina, Michael Rickman was privileged to have been a pupil of the late Grace Potter Carroll, herself a pupil of both Ferruccio Busoni and Theodore Leschetitzky. He holds degrees and the performer’s certificate from Mars Hill College and the University of North Texas where he was a pupil of Richard Cass and Jack Roberts. He studied further with Karen Shaw of Indiana University. In 1978, Michael Rickman received top honors in the Theodore Leschetitzky International Competition, Carnegie Hall, New York. For two seasons, he was resident pianist with the Petit Jean Music Festival, working with pianist Dalton Baldwin. He has appeared in concert with both the Audubon and Mendelssohn String Quartets, in conjunction with the Florida International Festival.

In the most recent seasons, Dr. Rickman has performed Mozart’s Piano Concerti, K. 271, K. 449, K. 595, and the cycle of Beethoven’s Piano Concerti with the Daytona Solisti Chamber Orchestra, under the direction of Susan Pitard Acree. In 2017 Michael Rickman was appointed Artist in Residence with the Daytona Solisti Chamber Orchestra. Other concerto appearances with Florida Symphony Youth Orchestra, the Florida Young Artists Orchestra, and the Stetson University Orchestra include Mozart’s Concerti, K. 482, K. 488 and K. 491; Rachmaninoff’s Rhapsody on a Theme of Paganini and the Second Piano Concerto; Concerti of both Schumann and Grieg; and Wedding Cake and Carnival of the Animals by Camille Saint-Saëns.

Dr. Rickman is a frequent adjudicator at various state, national and international competitions, having recently adjudicated the auditions of the Music Teachers Association of California in San Pablo, February 2014. His performances include national conferences of both the American Musicological Society and College Music Society, and the Alabama Music Teachers Association state conference, as guest artist and clinician. Michael Rickman’s recordings are available on the Lakeside Records and Clear Note labels, Romantic Realms, with works of Schubert and Brahms, and Romantic Realms II, with works of Robert Schumann. Also on the clear Note label are his recordings of Brahms and Carreno with the mezzo soprano, Jane Christeson. His performances can also be heard frequently on Florida Public Radio.

In 2010 Michael Rickman was honored by being placed on the international roster of Steinway Artists. Daytona Solisti is very pleased to welcome Olga Kolpakova as its new concertmaster beginning in the 2021-2022 concert season.Olga is a dynamic violinist and pianist who has gained recognition and won worldwide acclaim. A native of Mariyskaya ASSR, Russia, Olga received her Master’s of Music degree in violin performance from Kiev Tchaikovsky Conservatory with two additional years of post graduate study.

Olga is an accomplished seven year alumni member of the elite Kiev Chamber Orchestra, which is Ukraine’s leading ensemble. She made annual world tours with this chamber orchestra. She has performed in concert halls such as Carnegie Hall, Tanglewood Hall, Sovereign Hall, The London Royal Hall, Concert Gebau in the Netherlands and Bayreuth Theater in Germany. An active freelance violinist in Central Florida she frequently performs solo and with professional chamber and symphony orchestras.

In addition to an international performance career, Olga is a dedicated educator. Currently she has a very full teaching schedule of private students and holds a faculty position at Saint Andrews Conservatory of Music in Sanford. She is a long-standing member of the Orlando Music Club in which her students have frequently been awarded highly sought-after scholarships.

Daytona Solisti will feature Olga performing Mozart’s Violin Concerto No. 4, KV 218, in her inaugural concert with the orchestra on October 17, 2021. Joseph Corporon is principal cellist, frequent soloist and a founding member of Daytona Solisti Chamber Orchestra and an active freelance musician in Central Florida. He was previously Director of Music Ministries at Tomoka United Methodist Church in Ormond Beach, Polk Street U.M.C. in Amarillo, TX, and Associate Director of Music Ministries at St. Luke’s U.M.C. in Orlando, FL. He joins pianist Michael Rickman and violinist Susan Pitard Acree as a member of the Rickman-Acree-Corporon Piano Trio which performs annual concerts as part of the Daytona Solisti Concert Series.

Mr. Corporon is a graduate of the University of Miami in Coral Gables, FL, with a degree in cello performance. He is a former member of the Miami Bach Society and taught for several years in private and public schools in Miami. Mr. Corporon currently is on the music faculty of the Volusia County Public Schools. 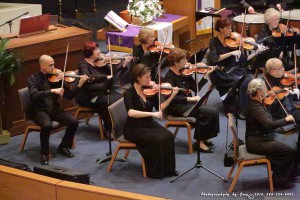 Daytona Solisti is comprised of professional musicians from Central and North Florida. Its aim is to provide a forum in which both players and listeners have the opportunity to experience the vast repertoire of chamber orchestra music by the master composers of the 18th and 19th centuries performed in the lively, expressive manner characteristic of that musical period.

Daytona Solisti Chamber Orchestra is comprised of a core of strings and harpsichord, specializing in music of the Baroque and Classical periods. As programmed repertoire requires, other instrumentalists are added to augment the core group, at times doubling it in size with added strings, woodwinds, brass, and timpani.

Daytona Solisti invites you to be a part of this exciting musical adventure, and offers a very special “Thank You” to its enthusiastic, dedicated musicians, audiences and volunteers. We wish to thank Lighthouse Christ Presbyterian Church and its staff for rehearsal and concert facilities. Together everyone makes Daytona Solisti possible!